Numbers dwindle but their stories must live on 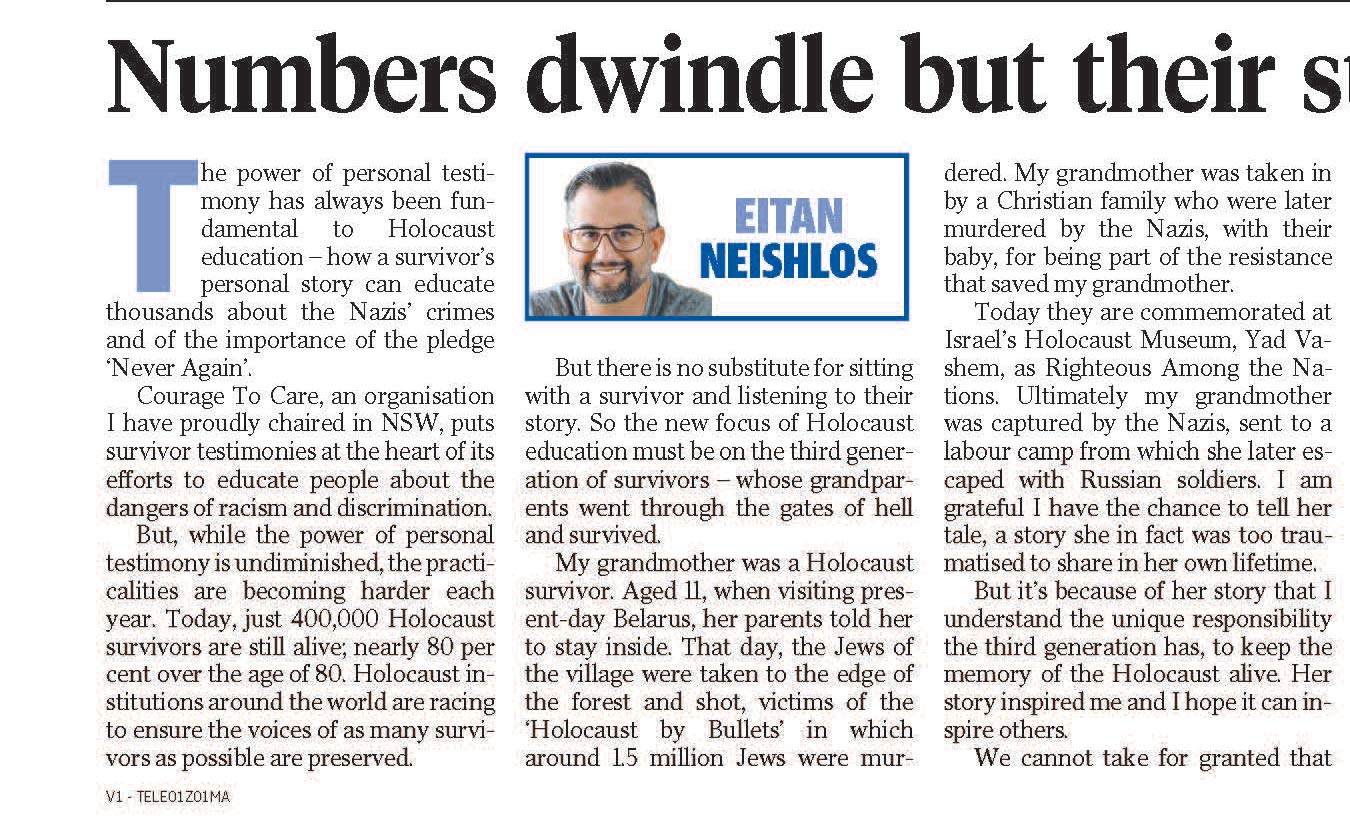 The power of personal testimony has always been fundamental to Holocaust education; how a survivor’s personal story can educate thousands of the Nazi’s crimes, and of the importance of the pledge ‘Never Again’.

Courage to Care, an organization I have proudly chaired in New South Wales, puts survivor testimonies at the heart of its efforts to educate people about the dangers of racism and discrimination. But, while the power of personal testimony is undiminished, the practicalities are becoming harder each year. Today, just 400,000 Holocaust survivors are still alive; nearly 80 percent over the age of 80. Holocaust institutions around the world are racing to ensure the voices of as many survivors as possible are heard and preserved.

But there is no substitute for sitting with a survivor and listening to their story.

So the new focus of Holocaust education must be on the third generation of Holocaust survivors –whose grandparents went through the gates of hell and survived. My grandmother was a Holocaust survivor. Aged eleven, when visiting present-day Belarus, her parents told her to stay inside. That day, the Jews of the village were taken to the edge of the forest and shot, victims of the ‘Holocaust by Bullets’ in which around 1.5 million Jews were murdered. My grandmother was taken in by a Christian family who were later murdered by the Nazis, with their baby, for being part of the resistance that saved my grandmother. Today they are commemorated at Israel’s Holocaust Museum, Yad Vashem, as Righteous Among the Nations. Ultimately my grandmother was captured by the Nazis, sent to a labour camp from which she later escaped with Russian soldiers.

I am grateful I have the chance to tell her story – a story that she in fact was too traumatised to share in her own lifetime. But it’s because of her story, that I understand the unique responsibility the third generation has, to keep the memory of the Holocaust alive. Her story inspired me and I hope it can inspire others.

We cannot take for granted that people will continue to understand the Holocaust and its significance. Throughout the pandemic, for example, we have seen anti-vaccine protesters around the world perversely compare themselves to the Nazis’ Jewish victims. This trivialization of the Holocaust can only be combated through robust education.

Riddled with Holocaust distortion, denial, and ignorance, antisemitism continues to rage around the world, on and offline. In Texas, a man took hostages at a synagogue spouting conspiracy theories, in just one incident that recently grabbed the headlines. In Brooklyn, a women spat at Jewish children and told them “Hitler should have killed you all”.

In the absence of Holocaust survivors, the fight against these trends will become more difficult. Yet, I am optimistic. The success of Holocaust educational institutions in utilising technology to record survivors’ testimonies and preserve historical understanding, means that we have powerful means at our disposal to fight back against the hate and lies.

In the Holocaust survivors’ final decade, there is a burden on all of us to use this precious time to learn everything we can from them, and ensure that the Holocaust will never be forgotten. I am proud and humbled to be representing the third generation at this year’s March of the Living to Poland, and to help in passing the responsibility of Holocaust remembrance to generations to come.

The messengers are changing; but the mission remains the same.

Eitan Neishlos is a grandson of a Holocaust survivor, Founder & Chairman of The Neishlos Foundation, and a strategic partner to the March of The Living.